The Modi government has been trying to paint the Citizenship Amendment Bill (now Citizenship Amendment Act- CAA) as a humanitarian gesture for religious minorities from three select countries, and Home Minister Amit Shah had claimed in Parliament that no Muslim Indian needs to fear the CAB or the proposed National Register of Citizens, before the Bill had received the President’s nod to become a law on December 12.

But the students I spoke with are far from convinced, especially after the horrific incidents that unfolded at the Jamia Millia Islamia in Delhi and the Aligarh Muslim University in Uttar Pradesh.

Mohammad Amir, a former management student at AMU fears that if the Citizenship Act remains a law, it could set a precedent for religious bias in any future policy or legislation.

“Whether AMU or Jamia, protestors are viewing the CAA through the lens of the National Register of Citizens. There is a prevailing threat that our citizenship will be snatched away just because we follow a certain religion,” said Amir.

Iqra Raza, a student of literature at St Stephen’s College believes that Muslims have already become a target. Raza says she was attacked by a few ABVP goons on her way back from an anti-CAA protest in the North Campus of Delhi University.

“I was targeted for my hijab, cornered and beaten up. I was outnumbered seven to one and there was nothing I could have done. This was within 100 metres of police deployment, and even the university guards simply looked on as I cried and shouted for help,” she recalls, adding that the incident has traumatised her severely.

Raza shared that a second-year DU undergraduate wearing a hijab was also attacked on the very same day. Just days before, Prime Minister Modi while campaigning made a very obvious dog whistle remark targeting Muslims, saying that those creating violence could be identified “by what they were wearing”.

The CAA discriminates by granting expedited citizenship on the basis of religion, and by leaving out one religion in the list of other six, its true intent may indeed be to perpetuate the exclusion of Muslims from the citizenry.

Many of those I spoke to pointed out that the CAA does not mention the word “persecuted” or “persecution” anywhere in its text. This could mean that Shah’s talk of giving new hope to those allegedly facing religious persecution is just an eyewash.

“Due to the new CAA wording, a Muslim, someone who was previously considered a citizen of India could end up as a non-citizen,” says Hena Zuberi, editor-in-chief of MuslimMatters.org and head of the Washington DC office of the human rights organisation, Justice for All.

“While the Modi government claims that this is not the intent of the Act, the loophole is visibly large, and there is ample reason to believe that the path it provides for re-citizenship was the reason it was passed by Parliament,” Zuberi further said.

After huge protests in the northeast states by people opposing the new law for separate reasons, a number of students at universities elsewhere in India came out in protest, demanding that the government withdraw the Act completely.

Students at Jamia Millia Islamia were among the first to raise their voice. When they organised a protest march from their campus to Parliament House on December 13, they were stopped by police barricades.

According to the testimony of a student who wishes to remain anonymous, the police threatened them saying that they should protest quietly in their homes, for the streets do not belong to them to do such things.

“They first started throwing mud or chappals or bottles at us that they had picked up from the road, and then they started pelting stones,” the student recounts. Those who tried to resist the police and break through the barricades were detained. The police also fired teargas shells that day, injuring about 30-40 people, according to his testimony.

Again on December 15, when students were protesting peacefully on the Jamia campus lawns, the police opened fire according to witnesses and assaulted any student they came across, regardless of whether or not they were a part of the protest.

“They went completely berserk once they broke the gates and came inside the campus,” says Alhayyat Pasha, a journalism student at Jamia, sharing what he described as one of the most terrible experiences of his life.

“I was just studying by myself in the library reading hall when the police started coming in numbers. I don’t think I have ever been so scared, I was just constantly shaking,” he said.

While the students took shelter in the library and bolted the doors, the police constantly fired inside and threw teargas shells. This shattered the glasses on the doors and windows, through which the students managed to escape, although some were dragged and beaten up, with their phones being taken away.

“I was lucky enough to have escaped, as I went straight to the gates before the police started rounding up the others,” says Pasha.

A research scholar in sociology at Jamia said on condition of anonymity that what the Delhi Police did was a complete violation of human rights, and illegal also because they are not allowed to enter the campus without permission, nor without female cops being present.

An Assamese by birth, she says she was deeply affected by the CAA, although the NRC is acceptable to her. She explains that most people in Assam are against the CAA for reasons different from the exclusion of Muslims as is the case elsewhere in the country.

“The NRC, which could have brought an end to the problem of illegal immigrants and border issues plaguing the state for long, will be completely nullified if the CAA comes into action,” she said.

The researcher confessed that she wasn’t very involved in the protests led by Jamia students in any way because she did not agree with their reasons.

“But then the course of horrific incidents that took place left a spine chilling disturbance, and I was forced to change my mind”, she alleged.

But Shamik Banerjee, a Master’s student of media governance, feels that condemning the police assault will not make any difference, and similar incidents are very likely to occur in the future.

“Delhi Police has already set a precedent when it comes to dealing with student protests, and since this is a university with a Muslim name we don’t really expect anything better from them,” Banerjee said. He added that he is an upper-caste Hindu who was never made conscious of his religion as a student in a Muslim-majority campus space in all the time he has been there. 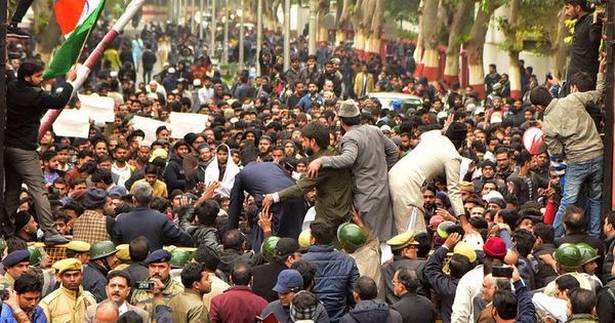 A protest at the Aligarh Muslim University against the Citizenship Amendment Act on December 13, 2019.. | Photo Credit: Manoj Aligadhi

Meanwhile, similar horrors were unfolding at the Aligarh Muslim University as well. It began with a mass hunger strike against the CAA and NRC on December 12, following the passage of the Bill. On 13th, more students joined in and gathered at the Bab-e-Syed masjid to protest against the police brutality in Jamia. The police then filed an FIR against 700 students for allegedly violating Section 144, although students later claimed that Section 144 hadn’t been imposed in the area at the time.

The government deployed the Rapid Action Force at the university entrance gates and in the early hours of dawn suspended the internet in the area.

“It was like any other normal day, until we received a message that the gate has been broken and students are being choked with teargas” said a student who wished to remain anonymous. “Aligarh had become a battleground. People were being thrashed inside the campus, teargas and stun grenades were being thrown at the students, and bikes were being smashed.”

The student said that the Rapid Action Force entered the campus and set Room 46 of the Morrison Court on fire. The students were locked inside their own residential halls and washrooms.

A law student at AMU stated that that it takes five years of blood and sweat to complete a law degree, understand a single section or amendments, and a whole lifetime to fight for and practise the same.

“A law that makes students evacuate prestigious institutions whose admission tests take months of preparation to crack cannot be implemented or accepted,” she said, adding that she still harbours a hope that the Supreme Court will scrap the Act.

“This is exactly what the government wants, and it is extremely saddening,” said Zeeshan Abdullah Shaikh, a student of medicine at AMU. “They will not let us study, and by making us evacuate our hostels they’re already making us feel like refugees running for our lives.”

“The way they came at us, in both Jamia and Aligarh, it was like they had no regard for our lives, neither as students nor as Muslims,” another student alleged. “There have been student protests and demonstrations in other universities a lot of times, but never has there been open firing and assault to this degree. It’s clear that our Muslim names are a marker.”

Michael Kugelman is the Deputy Director of the Asia Program (specialising in Afghanistan, Pakistan and India and their relations with the US) at the Wilson Center in DC, which is a non-partisan policy forum that tackles global issues through independent research and open dialogue. According to him, universities in many places and not just in India can be a hotbed of activism as it encourages different and individualistic thoughts.

“This is also why universities with large Muslim student populations will be particularly concerning to the government, based on the assumption that those students would be particularly inclined to protest and oppose the law. They would try to suppress any opposition in such cases, even if they have been largely non-violent”, he said over a short interview.

However, according to Kugelman, the Indian Muslims do happen to have a surprising ally in the cause after all: the far-right Indian Hindus that oppose the citizenship law.

He believes as the BJP does not want to alienate Indian Hindus, it could very well prove to be completely adverse to their exclusionary policy if they’re seen protesting with the Indian Muslims on a large scale.

“That show of unity could just be the very powerful thing that unsettles the ruling party in a big way”, he said. 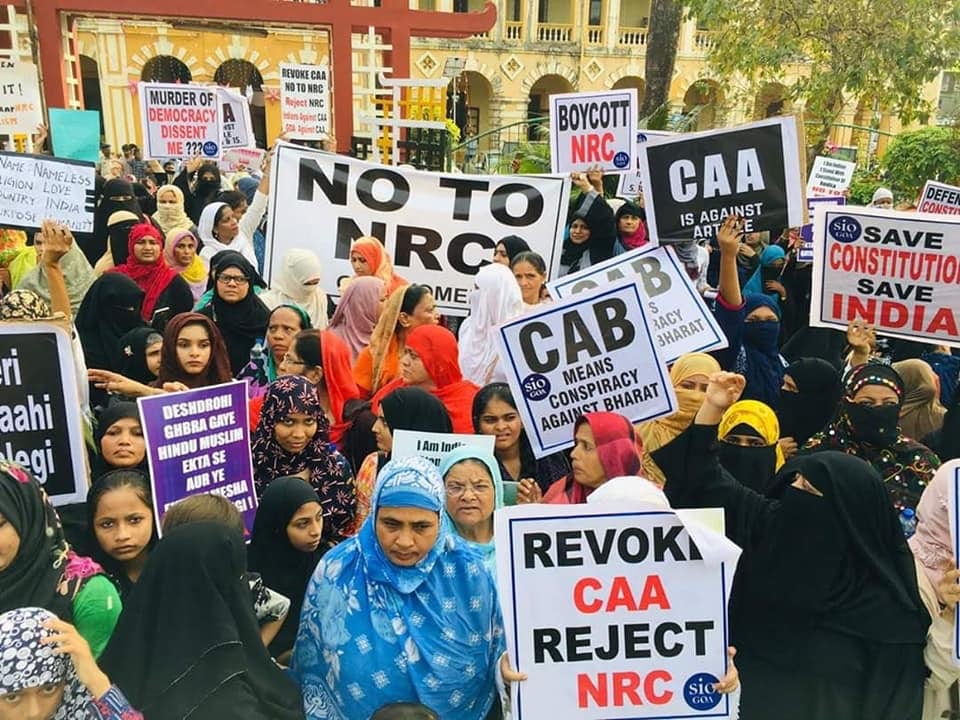 Speaking from the Justice for All office in Washington, DC, Zuberi also concurred with this. She said that the government wants the Muslim youth to be crushed so that no resistance takes root, and in this process, to intimidate non-Muslim youth in the hope that they will eventually drop out of the protests, thinking it doesn’t affect them in any way.

Zuberi also mentioned her fear that if students from other religious communities were to stop taking part in the protests, Muslim students might be detained indefinitely under laws like the anti-sedition law – which governments in India have often used to detain or jail people opposed to their policies.

Mohammad Assaduzzaman, who is currently pursuing a masters in material chemistry and mineralogy at the University of Bremen, said he would feel very scared to return to India in light of all that is happening, although he added that the huge number of non-Muslims taking part in the protests has given him a lot of hope.

Yet he too expressed a similar fear: what might happen if people from other religions stop lending support to the community after a point?

The post What Indian Students Are Saying about the CAA NRC Project – And Its Implementation appeared first on MuslimMatters.org.