WATCH: Bloomberg Claims Mass Suspicionless Muslim American Surveillance was “exactly within the law” and “the right thing to do”

Former Mayor Michael Bloomberg claimed in an interview with PBS New Hour that the mass suspicionless surveillance of Muslim Americans was “exactly within the law” and “the right thing to do”.  The program was conducted as a joint effort between the NYPD and the CIA aimed at Muslims not only in NYC, but as well in Pennsylvania, Connecticut, New Jersey, and elsewhere.  It targeted mosques, university student associations, community leaders, cabbies, and more.  Informants and spies were sent to not only gather information on Muslims, but to attempt to bait and entrap them as well. The program reportedly did not produce a single conviction.

Bloomberg’s assertion that “the courts ruled that it was exactly within the law” is false.  The NYPD was taken to court and forced to settle in Hasan v City of New York lawsuit after it was found that the First Amendment rights of the plaintiffs, among other rights, had been grossly violated.  The court stated:

What occurs here in one guise is not new. We have been down similar roads before. Jewish-Americans during the Red Scare, African-Americans during the Civil Rights Movement, and Japanese-Americans during World War II are examples that readily spring to mind. We are left to wonder why we cannot see with foresight what we see so clearly with hindsight—that “[l]oyalty is a matter of the heart and mind[,] not race, creed, or color.” Ex parte Mitsuye Endo, 323 U.S. 283, 302 (1944). 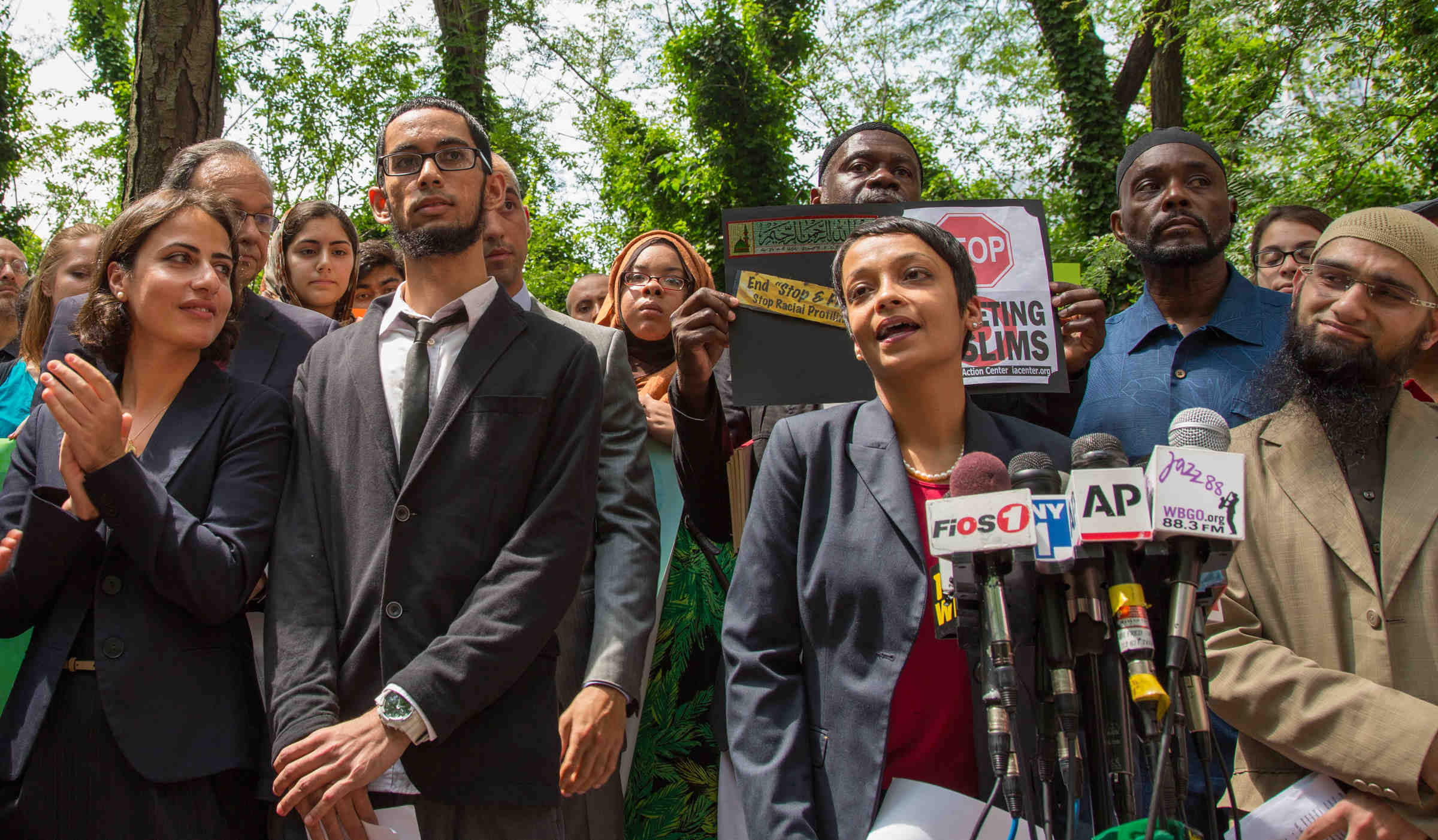 The ACLU, the NYCLU, and the CLEAR project hold a press conference with plaintiffs Asad Dandia and Imam Hamid Hassan Raza in their lawsuit against the NYPD mass suspicionless surveillance

Under the terms of the settlement, the NYPD agreed to the following, in summary:

The Human Impact of this Program

Bloomberg also asserted the NYPD’s conduct was “the right thing to do”, but not only was it illegal, it caused stress and harm to all those impacted.  Take Asad Dandia, for example:

Bloomberg terrorized me and my people. His surveillance brought enormous mental and emotional stress to my parents, who *still* ask me to vet any new friends.

Like my brother Raf, I will never shame folks for refusing to vote for that monster. I may even join them in abstaining. https://t.co/itRXU4vUF8

The consequences of this program were that it created a stigma on Muslims, it interfered with the ability of religious leaders to deliver proper sermons / khutbahs for fear of what could be taken out of context, it caused mosque congregants to be suspicious of newcomers and dissuaded attendance, it harmed political engagement in protests and public debates for fear of profiling, and it created major distrust of law enforcement and their ability to protect the community at large.

Mayor Bloomberg has apologized for stop-and-frisk claiming he reduced it by 95% after its problems came to light, though in reality that’s simply not true – he was defending it as late as the month before his presidential bid, and it was reduced to due a court ruling he opposed.  It’s pretty obvious his apology is for his presidential run.  Likewise, his statement in the PBS interview “not all Muslims are terrorists, nor are all terrorists Muslim” as well as his support for the construction of the “Ground Zero” mosque are all commendable, but they are not enough to escape the charge of harming and discriminating against Muslims as a faith group.  Muslim Americans and Democrats, particularly those who think he’s a viable alternative to Sanders in the moderate / centrist lane should demand the former mayor also apologize for his actions against our community, and even if it is insincere, it should be understood that overt discrimination in policy or rhetoric against our community or any other should come with serious social and political repercussion.

The post WATCH: Bloomberg Claims Mass Suspicionless Muslim American Surveillance was “exactly within the law” and “the right thing to do” appeared first on MuslimMatters.org.