I’m so excited to share the release of Zaid Karim Private Investigator.

This novel has been three years in the making: from when I first began serializing it on MuslimMatters.org in early 2017, to its completion on MM nine months later, to the first wave of revisions based on comments by my editor Amy Estrada and the MM readers, to the final revision after further input from another editor, Rafael Lopez.

If you’ve already read it online, I encourage you to buy the new ebook or paperbook. There’s nothing like holding a physical copy in your hands. And there have been some changes.

One thing I’ve consistently noticed in the input I’ve received from MM readers is that a lot of you are doctors! My characters always seem to get injured, and apparently I often make mistakes when describing their treatment or symptoms. And the MM readers call me on it. I’m grateful for that, and I have always made changes to the story in response.

The final version is, in my opinion, tight as a drum. I added a few minor transitional scenes, and eliminated a lot of irrelevant musings by Zaid that tended to take the reader away from the action. Zaid has an irreverent and odd sense of humor, and that flavors the book, but Rafael Lopez pointed out that the inclusion of this humor during climactic moments sabotages the tension of the story, and he was right. So I ended up deleting some of those.

A key change from the MM version occurs during the climactic battle on Ouagadiri Island. I don’t want to give it away, but I’ll say that it was an important change, and had to do with how I see Zaid, and how he sees himself. Let me know if you read the book and catch the change, and what you think.

Here are some answers to questions I often receive about Zaid Karim Private Investigator, and about my writing process in general:

Q: How much of this book is fact and how much is fiction?

A: Telling the true story of my life would be problematic. So I fictionalize. Every novel I’ve written has some autobiographical elements, with fictional events and invented characters mixed it. Lately, in my short stories, I’ve been trying to branch out more and create characters that are wholly fictional. Well, let me amend that. I create characters whose lives are based on real-world social dynamics and believable situations. I want emotional honesty above all. The particular circumstances of their lives, however, are invented.

Q: How did you get the idea for this book? 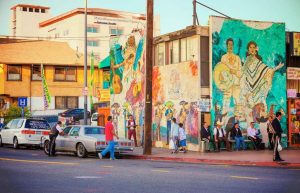 A: When I was twenty one years old I helped a friend track down and find his young missing daughter. But it was quite different from the narrative in Zaid Karim. For example, we started our search in East Los Angeles, first talking to people, then breaking down doors. Along the way we crashed our car in Mazatlan, had a nearly disastrous run-in with the Mexican police in Guadalajara, got in an argument with South African Tablighi Jamaat members at the Egyptian Club in Mexico City, were invited to a bizarre meeting of wealthy Mexican sufis, and ended up in the mountains of southern Mexico. That incident was the seed for Zaid Karim.

As for the setting in the latter half of the book, I lived in Panama for four years, and in fact I lived in El Valle de Anton, the idyllic little town where Yusuf Cruz lives. Though my house was not a mansion!

A: Yes, at times. He is young, and he’s been through a lot. He wants to change, but doesn’t know how. He needs some catalyst to transform his thinking. I suspect that novel that Alejandra gave him, On My Way to Paradise, will play a role. As he continues to grow, I believe we’ll see him evolve.

Q: So you plan to write more Zaid Karim mysteries?

A: Depends on how well this one sells. If you want to see more, buy ten copies: one for you, and nine for your friends, ha ha.

Q: What about a crossover between Zaid Karim and Hassan Amir?

A: It could happen. Zaid is Jamilah’s cousin, after all, and their stories happen around the same time.

Q: Who would win in a fight between Zaid and Hassan?

A: Lol, why would they be fighting? But here you go:

Q: What’s next for Zaid Karim?

A: His body will need healing time and therapy, but knowing Zaid he will probably plow right ahead. He needs to investigate this so-called convert who is trying to radicalize the youth. We will learn more about the event that enabled him to be pardoned and released from prison early. We just might learn more about the strange comment made by Farah Anwar regarding Zaid’s mother, that she should have “aborted you and kept the lame one.” Zaid will almost certainly return to Panama, to find Angie and try to help her, especially now that he is a foster father to he daughter. Lastly, an important figure from Zaid’s past, a person of power and influence, might call upon him to investigate a crime he is uniquely qualified to handle. Stay tuned.

See the Story Index for Wael Abdelgawad’s other stories on this website.

Wael Abdelgawad’s novels, Pieces of a Dream, The Repeaters, and Zaid Karim Private Investigator, are available on Amazon.com.