It was a Wednesday night in April and as I was getting ready to go to bed, a direct message popped up in my Instagram inbox. A little background; my personal  account on Instagram is private and it is rare that I let anyone, whom I do not know, follow me. But seeing that this was a grown “woman” with a baby and I had at least seven mutual friends, I let her follow me.

I will say, I was definitely in the wrong to respond to someone I didn’t personally know. Somehow I thought her 105K followers gave her credibility.

I was gravely mistaken.

I opened the direct message.

She had sent me a message complimenting me. This wasn’t new to me because I often get messages with compliments about my appearance from friends — we are teenagers. However, the stark difference was that I didn’t know this person at all. (I came to learn that these types of messages can go under the category of grooming). After complimenting me, she asked whether I had ever considered modeling for a hijab and abaya company.

Many young women are targeted by predators on Instagram. Here is my story. ‘After complimenting me, ‘she’ asked whether I had ever considered modeling for a hijab and abaya company.’Click To Tweet

I replied, saying that if I had more details I’d consult with my parents and give her an answer the next morning; to which she responded demanding she must have an answer the same night as she had other offers to make.

I then went to ask my mother. Mama was sick with the flu, quite woozy, but despite her state she said, 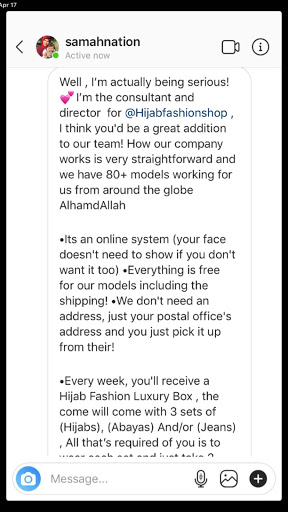 I decided to play along with it and test her.

I told @samahnation to tell me more and how I could verify her and her company. She then sent me numerous copied and pasted answers —hecka long— about how I could trust her; how the company would pay me and how they will still make money in the meantime. 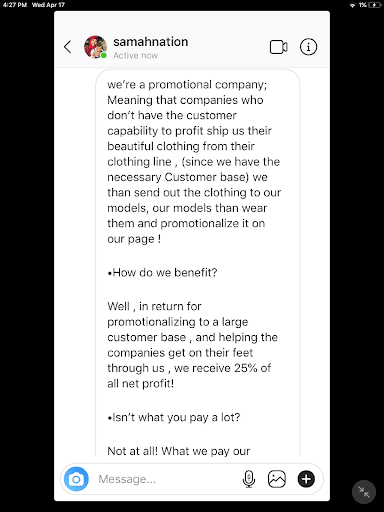 Thankfully, I was apprehensive during the entire ordeal, but as you can see, this type of manipulation is so real and possible for young women and girls to fall prey. This experience was honestly quite scary and jarring for me. I was so easily distracted by what she was portraying herself as on her profile. She had a GoFundMe for a masjid in her bio and posts of photos depicting her love for her baby. 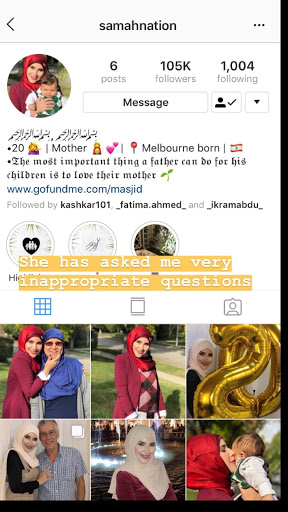 I began to do some research. I stumbled upon an article about a ‘Hijab House’ model scam. Using the title of ‘consultant director’ for a well-known hijab company, Hijab House, predators were allegedly preying on young girls in Australia. Hijab House has denied any link to this scam. 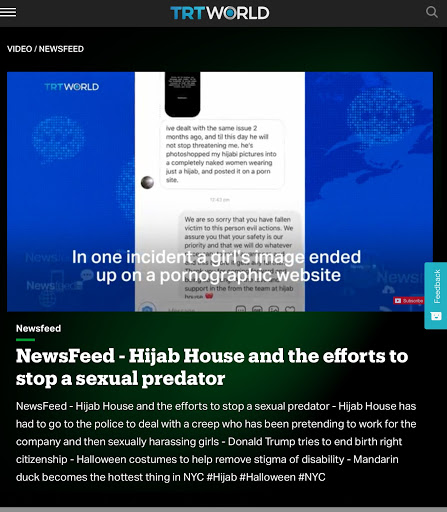 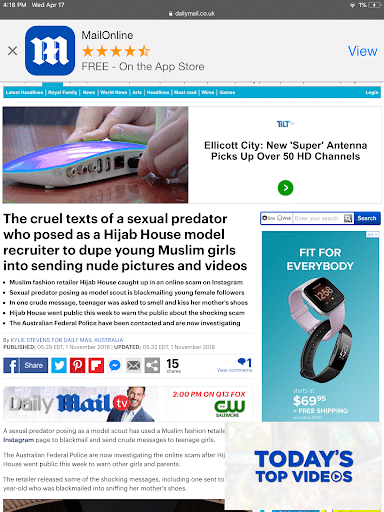 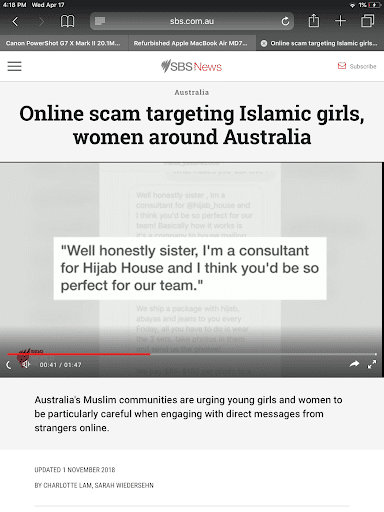 The predator went as far as to blackmail and pressure their victims into sending nude photos, or doing crazy things like smelling shoes! Eerily enough, @samahnation’s Instagram bio stated that she was based in Melbourne, Australia. 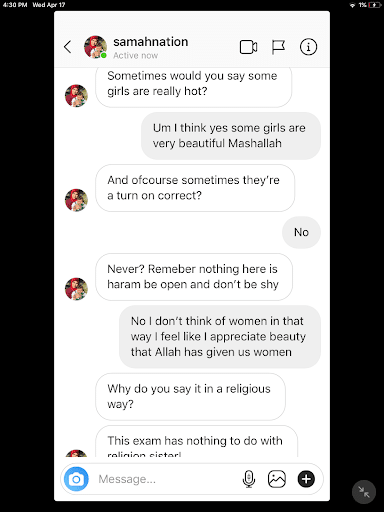 The more I engaged with this predator, the more ludicrous their responses and questions got. And this happened within the span of 24 hours. 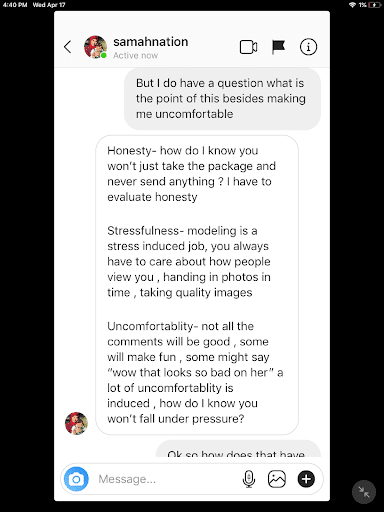 She went as far as to ask me if I would answer questions for a survey, saying all that mattered was honesty and that the purpose of the survey was to make me uncomfortable to see if I “won’t fall under pressure.”

Clearly, this last statement about being a speech analysis specialist was a complete fabrication. Again, may I reiterate that even older people can fall prey. You don’t have to be young and impressionable, these manipulative perpetrators will do anything to get what they want. 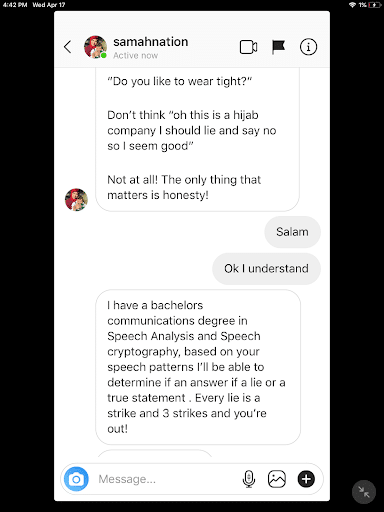 As shown below, the situation reached an obscene level of ridiculousness. You can see clear attempts to gaslight me and pressure me into answering or changing my stance on my replies. 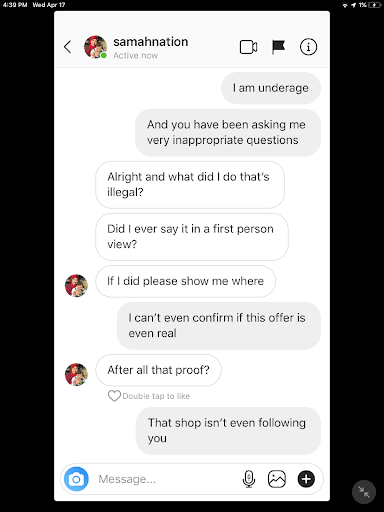 This was the last thing I said to the predator before I blocked and reported them in an attempt to get them caught. Observe how as soon as I called this person out they immediately became defensive and tried to manipulate me into thinking that what they were doing and asking me was completely normal- that I was the crazy one for asking for proof.

Unfortunately, this is just the tip of the iceberg. They had asked me questions I found too lewd to even answer or take screenshots of.

This bizarre encounter was honestly astonishing. I do not even know if I was talking to a man or a woman.

Alhamdullilah, I am so glad because even if I was a little bit gullible, I was aware enough about predatory behavior that I didn’t fall victim to this perpetrator. I am especially grateful for my mother, who has educated me about predators like this from a very young age; whom even in her drowsy state was able to tell me it was a preposterous scam.

I could have been blackmailed.

Talk to your parents or a trusted adult

I am grateful for having an open channel of communication, that my relationship with my mother is based on trust and I could go to her when this occurred. This is a reminder and a learning opportunity for all of us how these scary things can happen to anyone. We must learn how to take caution and protect ourselves and our (underage) loved ones against such situations.

Sis, please talk to your parents. They love you and will be your first line of defense.

Grooming is a very common tactic online predators use to gain the trust of their victim. According to InternetSafety101, young people put themselves at great risk by communicating online with individuals they do not know on a personal level. “Internet predators intentionally access sites that children commonly visit and can even search for potential victims by location or interest.

If a predator is already communicating with a child, he or she can piece together clues from what the child mentions while online, including parents’ names, where the child goes to school, and how far away the child lives from a certain landmark, store, or other location.
Online grooming is a process which can take place in a short time or over an extended period of time. Initial conversations online can appear innocent, but often involve some level of deception. As the predator (usually an adult) attempts to establish a relationship to gain a child’s trust, he may initially lie about his age or may never reveal his real age to the child, even after forming an established online relationship. Often, the groomer will know popular music artists, clothing trends, sports team information, or another activity or hobby the child may be interested in, and will try to relate it to the child.”

These tactics lead children and teens to believe that no one else can understand them or their situation like the groomer. After the child’s trust develops, the groomer may use sexually explicit conversations to test boundaries and exploit a child’s natural curiosity about sex. Predators often use pornography and child pornography to lower a child’s inhibitions and use their adult status to influence and control a child’s behavior.

They also flatter and compliment the child excessively and manipulate a child’s trust by relating to emotions and insecurities and affirming the child’s feelings and choices.

* Prey on teen’s desire for romance, adventure, and sexual information.
* Develop trust and secrecy: manipulate child by listening to and sympathizing with child’s problems and insecurities.
* Affirm feelings and choices of child.
* Exploit natural sexual curiosities of child.
* Ease inhibitions by gradually introducing sex into conversations or exposing them to pornography.
* Flatter and compliment the child excessively, send gifts, and invest time, money, and energy to groom the child.
* Develop an online relationship that is romantic, controlling, and upon which the child becomes dependent.
* Drive a wedge between the child and his/her parents and friends.
* Make promises of an exciting, stress-free life, tailored to the youth’s desire.
* Make threats, and often will use child pornography featuring their victims to blackmail them into silence.”

Another interesting observation I made is the clear gaslighting this pedophile was trying to perpetuate throughout my conversation with them. You may ask what is gas lighting?

According to Psychology Today, gaslighting is a tactic in which a person or entity, in order to gain more power, makes a victim question their reality. It works much better than you may think. “Anyone is susceptible to gaslighting, and it is a common technique of abusers, dictators, narcissists, and cult leaders. It is done slowly, so the victim doesn’t realize how much they’ve been brainwashed. For example, in the movie Gaslight (1944), a man manipulates his wife to the point where she thinks she is losing her mind,” writes Dr Stephanie Sarkis.

Another interesting observation I made is the clear gaslighting this pedophile was trying to perpetuate throughout my conversation with them. You may ask what is gas lighting? Click To Tweet

Recognizing signs that you may be a victim of gaslighting:

Second guessing. Are you constantly second guessing yourself when talking to this person or questioning your own morals that you wouldn’t have thought twice about otherwise? For example, when this person popped up in my inbox I wouldn’t have thought twice about blocking or just deleting the message if it was a man but, since it seemed to be a woman I was duped into thinking that it was more acceptable or I could trust them more.

Feeling as if you are being too sensitive. Again I cannot emphasize this enough that you must trust your instincts, if you are feeling uncomfortable and your internal alarm bells are ringing- listen to them! Anyone can be a victim of gaslighting or manipulation.

1. Trust your instincts (I’m going to reiterate this, always trust your gut feeling, if you feel like you are uncomfortable whether it’s a situation you are in or if you don’t have a good feeling while talking to a certain person I advise you exit the chat or don’t answer in the first place.)
2. Never answer to someone whom you don’t know. I will say this was my first and biggest mistake that I have made: allowing this person’s messages into my inbox, and replying to their ridiculous claims and questions. Now that I think about it I don’t even know if this was a woman or not.
3. Set your boundaries! This is probably the most important tip to take away from this article. Setting up your boundaries from the beginning is so important. Whether it is a friend, partner or colleague, if you do not set your boundaries from the beginning of your interaction or relationship with that person; people will not respect your limits and choices later on. Especially if your boundaries have to do with religion, moral compasses, or even specific pet peeves you have. I cannot emphasize how much boundaries matter when it comes to any daily interaction you may have in your daily life.