Last night I had the pleasure of hosting His Excellency Attorney General Abubacarr Marie Tambadou, the Justice Minister of the Gambia and Shaykh Imam Omar Suleiman at Honor Our Heroes in Washington DC. Imam Omar presented the Torch of Justice Award on behalf of Justice For All’s Burma Task Force and the American Muslim community to the Justice Minister for fighting genocide.

I have been working on stopping this genocide in my role as the Director of Justice For All and the part Attorney General Tambadou has played in taking this evil regime to the world’s highest court on behalf of the Rohingya is the kind of leadership and courage we need see on the global stage.

It was narrated that Qais bin Abu Hazim said:

When Abu Baccar Tambadou made his way from Gambia in West Africa, to the Rohingya refugee camps in Southeast Asia, he knew he couldn’t turn away from the evil he had witnessed.“

Abu Bakr stood up and praised and glorified Allah, then he said: ‘O people, you recite this Verse – “O you who believe! Take care of your own selves. If you follow the (right) guidance no hurt can come to you from those who are in error.”[5:105] – but I heard the Messenger of Allah ﷺ say: ‘If people see some evil but do not change it, soon Allah will send His punishment upon them all.’”

Listening to survivors’ stories he said the “stench of genocide” began drifting across the border into Bangladesh from Myanmar.

He said: “I realized how much more serious it was than the flashes we’d seen on television screens, Military and civilians would organize systematic attacks against Rohingya, burn down houses, snatch babies from their mothers’ arms and throw them alive into burning fires, round up and execute men; girls were gang-raped and put through all types of sexual violence.”

“It sounded very much like the kind of acts that were perpetrated against the Tutsi in Rwanda.

In that genocide, up to a 1,000,000 Rwandans were killed with machetes and rifles, about 70% of the country’s Tutsi population. Sexual violence was rife, with up to 500,000 women being raped.

At that time, His Excellency Abubaccar Tambadou worked as a trial attorney, where he was responsible for prosecuting violations of international human rights law in Rwanda. He secured the prosecution of four war criminals, including former Rwandan army general Augustin Bizimungu who called his victims cockroaches.

Here Abou Bacar was now, a decade later, witnessing the Rohingya genocide. More than 128,000 Muslims remain in detention camps in Burma today, where they have been confined since 2012, arbitrarily deprived of their liberty. More than 730,000 Rohingya have fled to neighboring Bangladesh since the military campaign of ethnic cleansing began in August 2017

Their villages have been burned down, their bodies discarded like waste, and the world has remained unwilling and unable to support them in their plight.

Simon Adams, head of the humans rights organization, Global Centre for the Responsibility to Protect, said there was only one man with the courage, skills and humanity to try to hold Myanmar accountable for the alleged atrocities.

“Some were afraid of retaliation from the Chinese” (who tried to stop the prosecution of Myanmar knowing that it may set a precedent for them being taken to court for their Uyghur  concentration camps).

Simon Adams continued to say, “Others said it wasn’t a good time, was too politically risky. [But] I was impressed by his fearlessness. He realized what would be coming pressure-wise but he was developing a strategy to deal with it.” 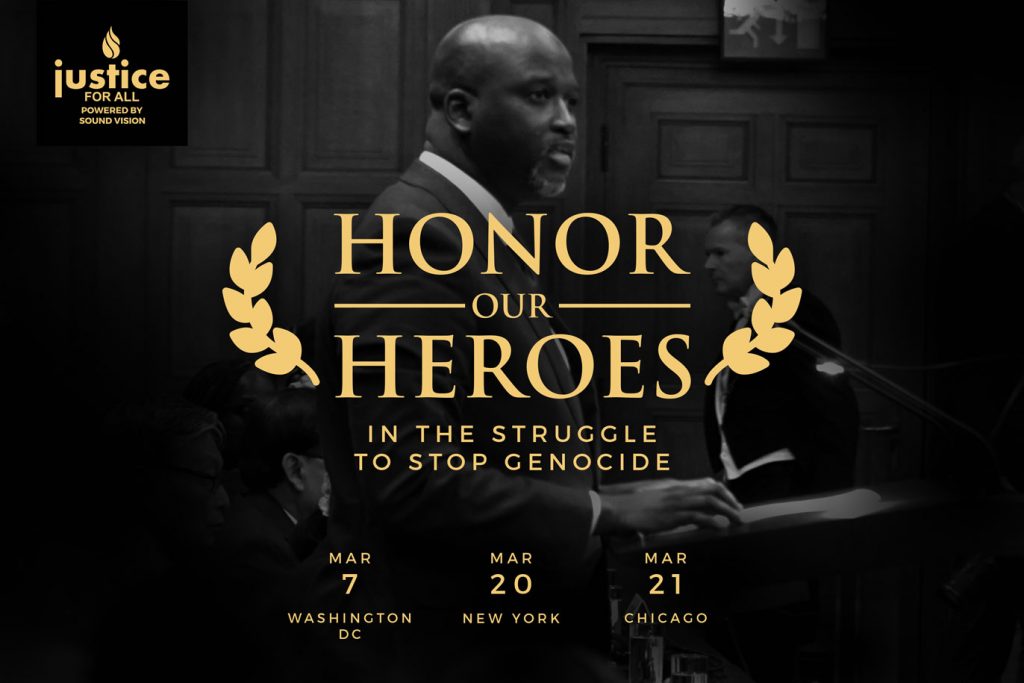 What is a hero?

Is it “an ordinary individual who finds strength to persevere and endure in spite of overwhelming obstacles? Is it “someone who understands the degree of responsibility that comes with his freedom? Is it someone who uses their power responsibly to support the powerless? Is it the man of resilience who is braver for 5 more minutes than his fellow man?

ran to the defense of the Prophet

when he was being persecuted for his beliefs and shouted:

Would you kill a man for saying his Lord is Allah?

Abubaccar Tambadou rushed to the support of the millions being persecuted for saying their Lord is Allah.

Abubaccar Tambadou fought for the rights of the oppressed Rohingya to be returned to them, and refused to succumb to the intimidation of the government of Myanmar (Burma) and other strong governments that feared being held accountable for their own war crimes.Click To Tweet

When Abu Bakr As Siddiq

was with the Prophet

, it was only the 2 of them and the third was Allah. Imam Al Ghazali (ra) said the most blessed oppressed one to support is the one who has no one but Allah (man la naasira lahu ilAllah), and so when you choose to champion those who others find no political usefulness in supporting, you become a special agent of Allah sent to their aid in rare company.

Your excellency Abou Bacar, may Allah grant you a generous space under the shade of His Throne on the Day of Judgment, and a distinguished station next to the Prophet

in the highest level of Paradise.

Justice For All’s Burma Task Force has filed a case on behalf of the victims of the Rohingya Genocide in the International Court of Justice- support the case by donating here. The Rohingya want justice.